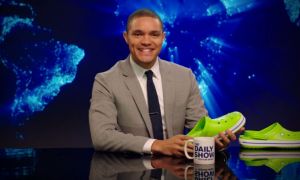 Celebrated comedian Trevor Noah finally gave in to the campaign and accepted to visit Uganda after a hard well-fought fight by Ugandans on Twitter (UOT) directed to Trevor after he disclaimed a newspaper story that said he would come down to the pearl of Africa sometime this year!

Hosting Trevor Noah would not be a bad idea as he will get to see the beauty beyond that exists around the source of the river Nile like other re-known celebrities have been graced to do that including the Queen of England, Will Smith, Jessica Alba, Natalie Portman to mention but a few. The US-based South African comedian and host of The Daily Show would be one of the lucky foreigners to see and experience the deeper beauty of the warm welcome and genuine happiness of the Ugandan people and nature at its best.
How it all started started

Trevor Noah had earlier last week disclaimed the visit with a tweet: “This is a scam, I’m not coming to Uganda.”
But his move in an unforeseen era of events instead ignited an online campaign, under the Twitter hashtag #TrevorNoahVisitsUganda, intended to make the comedian take second thoughts of reconsideration and to also let the rest of the world know about the “must visit” place dubbed “Pearl of Africa” in books of history.

This is a scam, I’m not coming to Uganda. https://t.co/fAh8EUdtO7

The pearl of Africa: Uganda in one way has been placed to have something more than what any other country may have be it, South Africa, in terms of wildlife which is why Uganda is a must-visit for all adventure seekers.

Ugandans as they usually are did not spare Trevor Noah, they came up with funny memes depicting the innocent lad on an undisputed run for his life tour of Uganda; not forgetting to tag the comedian for emphasis.
Trevor accepts defeat

In the long run, the farmers as we are known, got a handsome harvest from their hard work. Trevor humbly accepted defeat and promised to visit sometime. This shows the power of social media and how Ugandans are not sleeping when it comes to protecting and luring for their lovely nature-filled tough.

He finally threw in the towel and tweeted: “OK Uganda, you win. I’ll try to visit sometime.”
He, however, stated one condition. Trevor wants to have the “original Rolex” made by Sula in Wandegeya.

Many Ugandans were surprised that Trevor took his time to research the claimed wonders of Uganda-the pearl of Africa to the extent of knowing Sula in Wandegeya.

OK Uganda, you win. I’ll try to visit sometime. But when I land, I want the original Rolex made by Sula in Wandegeya #TrevorNoahVisitsUganda

We look forward to hosting you Trevor Noah and we bet after this visit you will not put the ‘Pearl of Africa’ after any other country!