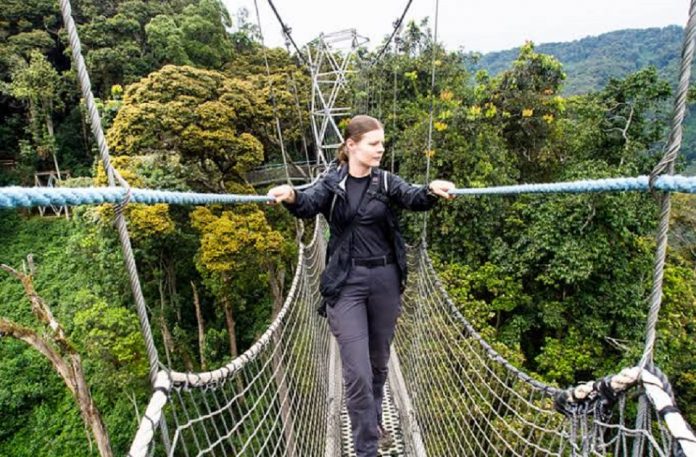 Rwanda is a small and landlocked country boarding east African countries. It is bordered by Tanzania in the east, Uganda in the north, Burundi in the south, and the Democratic Republic of Congo.

Rwanda’s Kigali city, the capital of Rwanda is one of the cleanest cities in Africa. It is also the largest and the social –economic, and capital city of Rwanda. It has an estimated population is 3 million people. A journey through Kigali will take you through the Gisozi Genocide Memorial, a must visit attraction while in Rwanda.

For those looking for wildlife safaris, Rwanda has four national parks. These protect a wide range of flora and fauna including the mountain gorillas that live in the Virunga Mountains.

Rwanda is gifted with four national parks endowed with beautiful scenery, Akagera being the largest national park with over 100 animal species and over 200 bird species.

Akagera national park was established in 1934 as the second national park. Akagera is the only savannah national park and the largest conversational area in the country with about 1200 square kilometers. The park consists of savannah, woodlands, Montana, and tropical rainforests.

Akagera national park is gifted with water bodies that act as a source of water for animals. The prominent water body is River Kagera, lake Ihema, and Lake Shakana. The population of animals in Akagera national park reduced during the turmoil genocide of 1994. The people encroached on the parkland and poisoned all the lions in the park.

Akagera national park was once known for the highest population of wild dogs in east Africa. The colonial masters found them disgusting and killed a number of them.

The government in Rwanda after the genocide realized the potential importance of tourism and embarked on restoring what was lost during g the gene site. The government decided to protect, reintroduce, and promote tourism through the Rwanda development board. Now all the big five buffaloes, lions, elephants, leopards, and Rhinos are in the park freely enjoying. Besides the big five mammals, tourists are also able to view other animals like zebras, impalas, elands, and bush backs. Water backs, hippos crocodiles among others.

The park is also the best place for bird watching in Rwanda with the concentration of water birds in the water bodies of the parks, with over 400 bird species

The partial success of tourism convinced the government to partner with other organizations to fence the entire park and improve the infrastructure like the roads, hotels, and lodges around the park. The park has the best infrastructure and accommodation.

What to do at Akagera National Park

there are various tourist activities to enjoy while in Kagera national park these include game drives which offer an opportunity to explore wildlife in Rwanda, bird watching, nature walks, and cultural tours

The volcanoes national park is located at a high altitude and temperatures unlike the low land areas of African regions.

The Virunga Mountains receive rainfall throughout the year and the temperatures are favorable for mountain gorillas. The tropical rainforest support animals for food.

What to do while at volcanoes national park in Rwanda

There are various fun and interesting tourist activity at volcanoes national park namely; 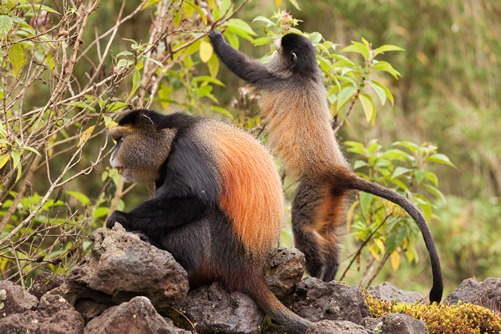 A gorilla trek is a must do while in Rwanda. Treks are taken daily into the Volcanoes National Park to see the mountain gorillas in their natural habitat. Gorilla tracking expeditions are the most exciting, enjoyable, and funny activity that gets travelers personal to the wild.

Gorilla trekking will have you hike volcanoes and national parks in search of gorillas depending on the family of gorillas assigned to your group. Rwanda has about 10 gorilla families and only 6 people are assigned to every family every day.

Volcanoes national park is also the best monkeys birdwatching destination in Rwanda with 400 bird species. Birds to spot include wagtail, sparrow, and heron ring-necked dove among others.

Nyungwe forest national park is one of the largest forested conserved areas in the country. Located in the southern part of the country, Nyungwe the  forest is the oldest forest monotone forest in the African region right away from the last time of the ice age

Nyungwe forest national park was established in 2004 it’s among the younger National Parks in Rwanda and is famously known for different tree species and canopy.

Nyungwe forest consists of the mountain ranges like those of Uganda and Congo. Hiking Nyungwe will offer a chance for the tourists to view Lake Kivu and Virunga ranges of volcanoes national park.

This is the smallest and youngest national park in Rwanda. It was created in 2015 after the merging of Mukura forest and Gishwati forest.  The launch of this new park is a clear indication of the Rwandese government’s effort to promote the country. The opening of Congo –the Nile trail, the opening of Musanze caves, and national heritage sites have made Rwanda the destination for east and central Africa.