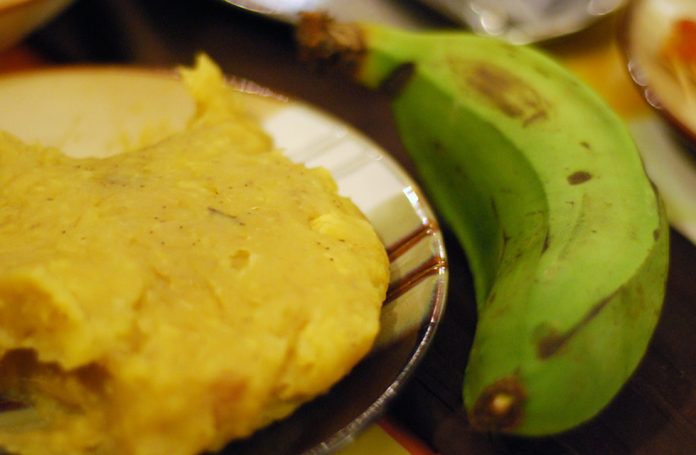 Matooke is a plantain and it belongs to the carbohydrate group of food.

It is a staple food for mainly people who live in the Central, western and South-western regions of Uganda. It was mostly common among the Baganda who occupy the central region of Uganda called the Buganda land but later it spread to other parts of the country.

Matooke can be cooked in many different ways as preferred which include but not limited to; steaming, boiling, grilling, and baking but the indigenous way of cooking it is by steaming and this is according to the Baganda where it originated from.

When cooking matooke by the steaming method, one needs the following;

The following procedure is followed,

The matooke is pealed and washed and the banana leaves are prepared too by removing the stalk and folding them neatly.

The sauce pan for steaming in is washed, put water and the stalks, then two banana leaves are added in as well.

The saucepan is put on a strong fire until the boiling is steady and the steam is coming through the banana leaves, now the fire is reduced to medium and the matooke is left to cook for 30-45 minutes. If water dries up, a little is added.

When the banana leaves have turned from green to brown, the saucepan is removed from the fire and placed on either banana peelings or used banana fibres but not a bare ground.

The pressed matooke is neatly covered and all the removed banana leaves are put back on top and tacked in neatly too. A new banana leaf may be added if necessary.

More water is then added to the saucepan but it should not touch the matooke, and the matooke is put back on fire and brought to boil for 5 minutes and then bring the heat low to cook gently for 30 minutes or as long as required (the longer the matooke cooks, the better the flavour and texture).

The matooke is served hot and wrapped in a clean cooked banana leaf to preserve the heat.

The accompanied sauce can be of your choice but fish in ground nuts, chicken stew, or meat stew are always preferred. You can uncover such on your own by taking a Self Drive tour in Uganda or by undertaking a guided tour around. Do not limit yourself to exotic foods, try out the local dish and be your own testimony.