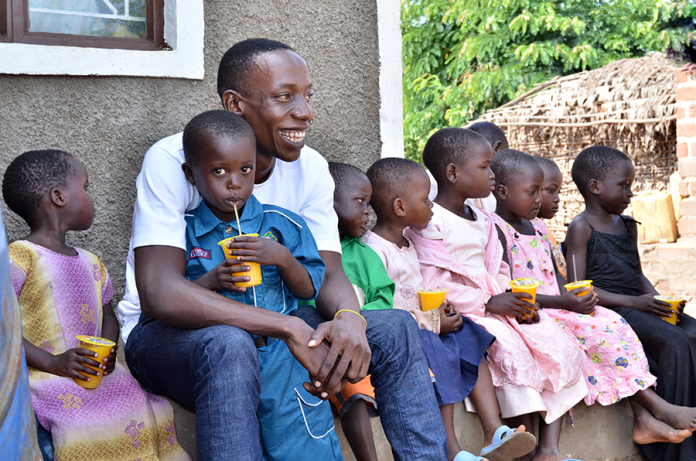 Ba Nga Afayo literally means “Act as you Care”. This means that if it is too much to ask that someone becomes part of solving a problem, can they at least act as they care. This itself would require action.

“It is all about restoring lives and equipping less fortunate children with the knowledge and skillsets necessary to discover and live out their true vocations, thereby creating the opportunity for them to lead successful and fulfilling lives.” Ddiba says.

Over the past three years, the initiative has been providing shelter and basic care to homeless children and orphans as well as providing children from surrounding community with free care, counseling, school supplies and education scholarships. Many of these Children come from broken or poverty stricken families and the center is a haven for them, whenever they need it.

And it started with one story. “It all began with just one abandoned child. She was dumped and left to starve to death by her unknown parents. My mum being a nurse, she brought the little malnourished kid home, I believe the kid had like a week to live. So about two years later when I was out of University, this little kid had completely recovered and my mum said there were many cases where this one came from.” Ddiba remembers.

Her recovery inspired Ddiba to go save more himself. “ I remember I was hoping to help one or two children but unfortunately the number of cases was overwhelming and the root cause was poverty” Says Ddiba.

And that’s how he started a movement among his friends and family to “Act like they care” and donate something to help these children survive.

For the last two years, the initiative has been able to place 45 children into school who would otherwise be without a family or education. “I have not only witnessed the lives of children being transformed through sponsorship, but have furthermore become convinced that Uganda can be restored through education of these less fortunate children.” Ddiba says.

One of touching stories out of the initiative is a story of a beneficiary called Ezesa (in English Esther). Eseza was born out of incest, a relationship between a niece and her uncle. In their tribe she was an abomination. She was thrown away at birth and no one wanted to be near her. “We met this girl when she was three years, never been breastfed, never been loved, and always fed on leftovers. She slept in the bush and she was hairy.” Ddiba says.

Eseza is now 6 years and she is going through recovery. “seeing her run around playing with other children makes me wonder where she would be if she was never found.” He says.

“Her story really touched me. I no longer have any choice but to acknowledge the heavy reality of it all: These children don’t just need our help–their very lives depend on it. It is mostly her story that keeps me going every time I think of giving up. I believe God brought her into our lives for a reason.” Ddiba says,

This however does not come off easily. His biggest challenge is that there is a lot of need and yet very limited resources. One incident he cites is a story of “Sula” one of the beneficiaries who got a sponsor and after just a few months, lost touch with his sponsor. “That right there is my worst moment. Until now, we have never told this child the bad news we don’t want to see that glow fade away.” Ddiba says.

One way how he is however fighting these challenges, is through partnerships. The initiative is currently working with Individuals, private companies, and churches in Canada, USA, UK, Romania and Argentina even though he is still working on creating a few local partnerships. Some of the volunteers at work during one of the Back To School Charity drive.

Six years from now, Ddiba sees BaNgaAfayo growing as one of the major players eradicating Poverty in Uganda with more branches all over the country bringing real and lasting change to families and children living in poverty.

Ddiba wants to be remembered as someone who set an example and left a footprint in humanity. He hopes that the work he does at BaNgaAfayo Initiative will live past him and continue to touch a life here, a life there.

“Keep this verse in mind, Hebrews 10:24. And let us consider how we may spur one another on in love and good deeds.” He concludes.
Like this story or have something to share? Email us on info@thisisuganda.org or connect with us on Facebook and Twitter.