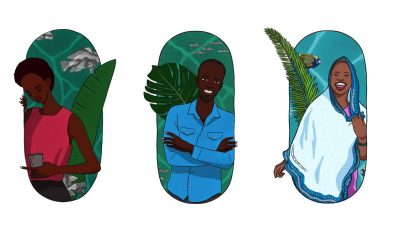 In 2017, Neema Iyer founded Policy a technology consulting and development firm to support the innovation of government service delivery across Africa.

Policy believes in the power of data to revolutionize how governments deliver services to their citizens. The ultimate goal of Policy is to digitally transform government services across Africa through an information-centric approach and craft better life experiences by harnessing improved data.

Through a partnership with the Mozilla Foundation, Policy has designed a web-based game dubbed “Choose Your Own Fake News,” which is aimed at tackling the spread of misinformation in East Africa, and Africa at large.

The game uses 3 real-life examples of characters to help the player explore different scenarios that portray how misinformation can have real-life effects.

Speaking to Neema Iyer, the team leader and founder of Policy, we got an insight as to what the game aims at achieving. According to Neema, the game doesn’t serve as an avenue to directly combat misinformation but rather looks to help the player to think about the actions to take when they come across fake news.

Neema Iyer, team leader and founder of Policy “It took us 6 months to complete the project. The game aims at giving a player a chance to think about the actions they would take in a bid to combat fake news,” she said.

“The whole point of the game is to scrutinize the information and news that you have. It’s just like role-playing out what you would do in a situation where you have information,” Neema added.

“Choose Your Own Fake News” has three characters — Flora, a student who lives in Uganda, Jo, a shopkeeper in Kenya, and Aida, a retired grandmother in her 60s.

Players are expected to get into the life of whichever character they choose and look through videos and news headlines that have to do with job opportunities, vaccines, and election violence, the 3 major scenarios that the game has.

Flora is expected to make decisions around a job interview based on a sketchy Instagram post — whether to do more research on the company before scheduling an interview or go ahead without digging deeper and fall victim to an internet scam.

Last year, Mozilla had an open call for the Creative Media Awards, and Neema grabbed the opportunity, applying for “Choose Your Own Fake News”, and it was accepted.

Through the Mozilla Creative Awards or CMAs, Mozilla selects and invests in people and organizations, like Policy, which creates solutions centered around making the internet more inclusive and secure. Last year’s theme for the CMAs was specific to how artificial intelligence or AI plays a role in the spread of misinformation.

Policy’s “Choose Your Own Fake News”, among many other projects, got $25,000 to execute, and the result, after months of brainstorming, and designing, is the web-based game.

Iyer, who drew the sketches for the characters in the game, said it was important to make them black because “Choose Your Own Fake News” is specific to Africans, she also added that as a technologist and artist, she prides herself in making her sketches black, as the race is often left out in many scenarios across the globe.

According to Neema, the game is not a full-proof safe case underlying that it can single-handedly tackle misinformation and fake news, however, it is a conversation starter in the direction of combating fake news in Africa.