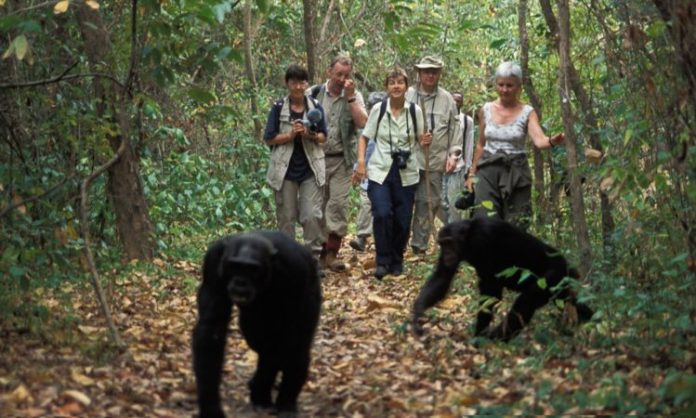 Besides gorilla trekking, chimpanzee trekking is one of the most interesting tourists activity in Uganda. Most Uganda tours feature chimpanzee trekking, an activity that involves walking through the dense forests in search of these wild primates with the help of armed rangers. These chimpanzees are first habituated before they are introduced to tourism for trekking.

Chimpanzee habituation is the process where chimpanzees are trained to get familiar with humans for tourism and research. For the best chimpanzee trekking in Africa Uganda has the most and best spots to view the close relative of a human being.

Chimpanzees belong to the family of apes which includes gorillas and orangutans. Chimpanzees are very closely related to humans and they have large brains ability to learn new things. The study by primatologists like Goodall has revealed the new futures of chimpanzees depending on the community they live in, habits and diet.

Two chimpanzee species still exist in the world. The common one is the pygmy chimpanzee known as the bonobo. The bonobo is found in east, south, and central Africa while bonobos are only found in the dense forests of Congo.

Both species can live up to 35yrs in forests and 55 years if put in the intensive care unit. Chimpanzee is intelligent and able to construct their nests where they stay using local materials.   They survive on seeds, leaves, fruits, honey, insects, meat, and other small mammals if a chance presents itself. 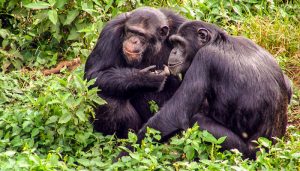 Chimpanzees live in an extended family unlike mountain gorillas in Bwindi impenetrable national park, chimpanzees can live in a family of about 20 – 100 individuals. Infants when they reach 4 years can split from the family and be independent. The large chimpanzee families can separate to go and look for food and get back to each other after eating.

The overall world’s population of chimpanzees has drastically reduced due to the destruction of their habitat by increasing human population, forest traps, human diseases, and the threat of poachers who hunt them for trade. However efforts to conserve the remaining chimpanzees to ensure that they keep surviving in the forest are under, and organizations like the Goodall foundation have been put in place to ensure the conservation of primates like chimpanzees and mountain gorillas which are declared the world’s endangered species.

The park was declared in 1993 covering an area of 776 square kilometers. Kibale forests national is one of the remaining ecologies in Africa containing both Montana and tropical rain forests. That act as habitats and food for chimpanzees.

The cost of chimpanzee trekking in Kibale national park.

Kibale national forest national park is located in western Uganda and can be accessed by road through the Kampala – Fort portal highway. About 6-7 hours.

The Kyambura valley is located north of Queen Elizabeth national park in western Uganda. The valley is 16 km and 100meters deep with thick and dense forests underground.

The valley is home to several primates like chimpanzees, Columbus monkeys, red-tailed monkeys, and blue monkeys, Baboons, and patas monkeys.

Kalinzu has over 200 individuals with only 70 habituated members which are open to tourism. Kalinzu forest can reach by road about a 6-9 hour drive on Kampala – Masaka highway.

Chimpanzees in Murchison falls National Park are tracked in Budongo forests .located within western Uganda in districts of Masindi covering 886 square kilometers with mahogany trees, and dense forests which act as the perfect shelter for chimpanzees. With over 800 chimpanzees, Budongo forest is the second spot to track chimpanzees after Kibale forests with almost t 100 habituated members.

Visitors who would like to spend more time with chimpanzees can opt for chimpanzee habituation in Budongo forests in Kaniyo Pabidi.

Rules and regulations for chimpanzee trekking

From Home of Impalas to Towering Kampala city