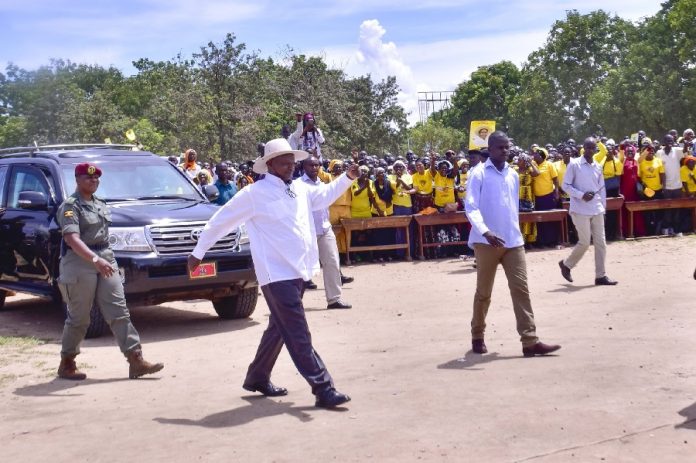 As we approach the end of 2016, it is quite natural to look back and search for the kind of beauty he was talking about – the beauty amidst the chaos that helped us throughout the year and also gave hope for the next one.

No matter the dark times and the harsh memories, everybody seeks that hope to wake up with each day. And on several occasions this year, Uganda helped us believe in that hope, and in happiness, humanity, and pride.

Many times this year, different people and incidents made Ugandans proud of being a part of this country. Here are our top 15 moments.

1. When we qualified for the African Cup of Nations after 38 years
Photocredit- KCCA

This remains one of the most historic moments which almost every Ugandan alive celebrated. The Uganda Cranes did the impossible and ended the 38-year-old curse. It was a long walk to AFCON!

2. The day Ugandans didn’t wait for the government to #SaveCarol
Source: Big Eye

The day April 23rd, 2016 changed the way citizens respond to help those in need. During this campaign, Ugandans forgot their political, religious, socio-economic differences and held what became one of the most popular and successful fundraising events of this decade. The campaign was to raise over UGX 200M for Carol Atuhirwe to go for cancer treatment in the US. She has gone through a series of successful treatment sessions in India.

In September this year, Ronald Katamba who developed the Jaguza Livestock Software Application, was recognized and awarded for his excellence and knowledge in e-Agriculture at the Commonwealth Telecommunications Organization Forum in Nadi, Fiji. Katamba won the award after he emerged as the winner of the e-Agriculture category at the Commonwealth Youth ICT Competition.

4. Then came the man who won us the first-ever Paralympics Medal
unnamed-75

5. Checkmate: When the Queen of Katwe movie put Uganda on big Hollywood screens
Madina played an impressive role as Phiona Mutesi in Queen of Katwe

For the first time, a movie set in Uganda was not about Idi Amin, Joseph Kony, Elephants, but it was based on a true-life inspiring story of Phiona Mutesi, a teenage World Chess Champion from Uganda.

The “Queen of Katwe” herself became the first Ugandan to be nominated for the Critics’ Choice Awards in the category of Best New young Actress. This opened her doors to more roles she can play thereby starting her journey in Hollywood.

7. When Ugandans applauded the government for the progress on the Entebbe Express Highway
The four-lane Southern bypass is near completion

The four-lane Southern bypass is near completion. Photo source: Internet

When drone pictures of the nearly completed Entebbe highway were posted on Social Media by the official State House Uganda Facebook page, they went viral. Many at first thought this wasn’t Uganda. Ugandans applauded the government for the excellent work it has done to improve infrastructure in the country.

8. Then came this story of a 26-year-old single-handedly giving shelter to 54 children in slums
This young man’s story is inspiring.

This young man’s story is inspiring.

In March this year, we wrote a story of Cyrill Kiiza, a 26-year-old unsung hero looking after children in slums so that they have a bright future. The story was picked up by CCTV.

9. And then the story of this woman giving teenage mothers in Uganda a second chance.

Source: Pelletier Teenage Mothers Foundation [PTMOF]
When Solome Nanvule was chased away from home after getting pregnant while she was still a teenager, she endured the pain and managed to break through. When life presented her a second chance, she swore never to let any teenage mother suffer the same way she did. She decided to set up a home for teenage mothers. Read her story here.

10. When this global map showed Uganda is best known for entrepreneurs
Niger has the most child brides while Libya boasts the fattest kids

Uganda is silently changing what it is known for globally. This map released by Information is Beautiful contributed to changing the global perspective on Uganda in 2016.

11. When CNN listed the Ugandan Rolex among the top African foods taking off

The Rolex which you thought is for bachelor and University students is going global. In June, CNN listed it among the top African foods taking off. A Rolex festival was also launched by the Tourism Ministry.

The Soroti Solar plant located on 33 acres of land in Soroti District, is made up of 32,680 photovoltaic panels, and has an output of 10 to 12 megawatt. The facility is the country’s first grid-connected solar plant and is expected to generate clean, sustainable electricity for 40,000 households. It is the largest in East Africa.

14. Then came the story of a girl from Ibanda reaching for the sky in fighter jets
Photo credit: Chimp Reports

Jacinta Kyomuhangi’s story moved many Ugandans and beyond. The Senior six dropout’s story is an inspiration to many women and girls defying the status quo and rolling up their sleeves to take up roles which society thinks are “by default”, for the opposite sex.

Uganda alongside Botswana, Zimbabwe, and South Africa will represent Africa at the 2017 World U-21 Netball championship. This came after the African qualifiers held in 5 months ago in Gaborone, the capital of Botswana.

We are all Ugandans at the end of the day. And we stand by each other.