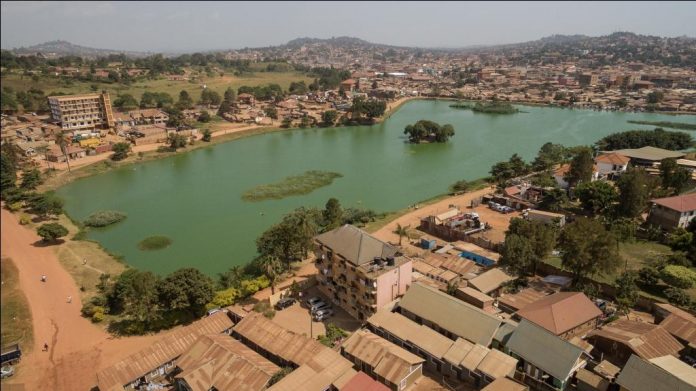 Kabaka’s lake is one of the largest man-made lakes in Uganda located 5km away from Kampala the capital city Ndeba Rubaga division between Nabunya road and ring road.

The Kabaka’s lake is among the top tourist attraction while on your Kampala city tour safari it should not miss on your package. Uganda’s largest manmade lake, Africa’s dugout lake constructed in a circular shape with an island inside is a jewel to the Buganda kingdom and cultural heritage of Buganda. The lake has no inlet river tributary to supply it water but rather has underground springs that supplies water to it and surprisingly whether in dry season or wet season the water levels remain constant.

The Kabaka’s lake was dug out in 1880 by the all 52 Buganda clans under the orders of Ssekabaka Mwanga II to act as an escape route for the king (kabaka) from the British armed conflicts. Ssekabaka Mwanga ii is  famously known for his aggressiveness, notorious and ruthless holistic killing of Uganda martyrs but like any other human being he has his positive achievements for example the geared the construction of Uganda’s largest man-made lake.

History behind the construction of Kabaka’s lake is very interesting one should visit the lake and explore history of its formation yourself as the guides will take you through. It’s located in the heart Of Ndeba town, and it’s a home to various bird species.

The Kabaka Mwanga ii wanted the lake to act as his escape route from the British armed conflicts so he had intention that whenever the situation get worse he would swim into it and runway.

The kabaka also had another plan of creating a channel to lake Victoria such that he can cruise from his palace to lake Victoria to do spot fishing it’s on record that Ssekabaka Mwanga liked swimming and fishing and he could find it had to walk to lake Victoria for fishing so he decide to come up with the plan to create the channel that can led him to the lake. But his plans were not successful because it was affected by religious wars that happened in Buganda kingdom in around 1880-1885 and he could not finish his plan.

Apart from the escape route, the Ssekabaka Mwanga also had plans to get easy access to his palace in Mulungu hills so close to Lake Victoria built by his father kabaka Mutesa before his death.

In 1880 when the kabaka ‘s lake was dug out, Buganda had a population of about 2 million people they all jointly combined to dig out the lake of their loved king . However the Royal people like princes, princesses, parish chiefs Saza Chiefs refused to join the common people and they were reported to the king .kabaka Mwanga reacted by taking up a task by himself to join the people who had obeyed to dig, in doing so the prince, chiefs and princesses got ashamed and as well joined the king and people to do the activity.

Currently, the lake covers an area of about 2 square kilometer with 200 ft. depth. It’s among the top attractions in Kampala and it can be visited while on your safari in Kampala city tour with Africa tours adventure, the jewel site heritage for Buganda kingdom.

The amazing side of this beautiful lake is that it’s a paradise for birders some of bird species that can be spotted include little egrets, marabou stock among others. The man-made has got an interesting picturesque view surrounded by fascinating environment.

In Buganda annual tourism expo than happens every year around August, the king (kabaka) takes the courtesy to officiate the watersport at the lake with his subjects. The kabaka is accompanied by his soldiers known as Abambowa dressed smartly in the traditional cultural attires well-armed with shields and spears, his prime minister known as katikiro, ministers as well as other dignitaries.

A visit to Kabaka’s will offer you a chance to see the Idi Amin’s torture chambers , the Kabaka’s palace as the wells the four gate ways to Kabaka’s palace with their meaning , the lake is just located adjacent to them . You will also observe people crossing the lake using traditional dugout canoes. There is an island where the king (the kabaka) goes for rituals occasionally. The Kabaka’s lake now is the resting place for local people who go there to get fresh air, listening to the sounds of the birds; there are plans to construct accommodation around the lake to boost tourism.