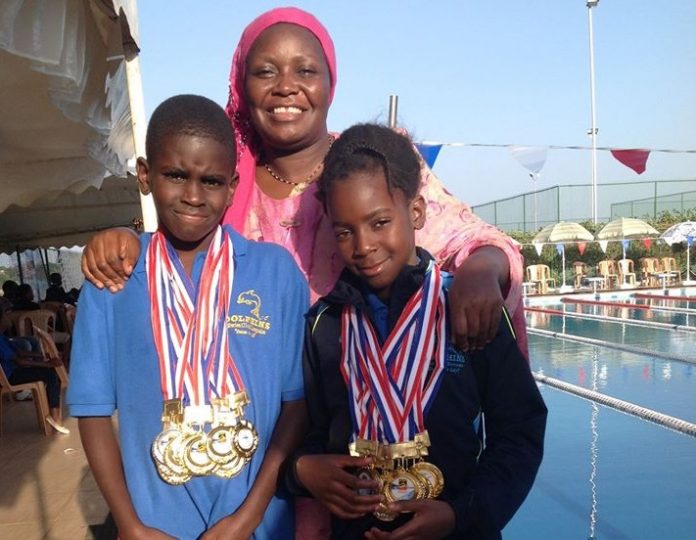 A family that plays together stays together. Truer words have never been spoken as regards to this family who have had a foot in every sport and gone further to win gold.
Hadijah Namanda is a sports personality and the Vice President of the Uganda Volleyball Confederation (UVC) who has gone on to propel her children, Tendo Mukalazi (13) and Kirabo Namutebi (10) to take on sports and succeed as champions in swimming across the world collecting medals as they go.
Tendo(14 medals), Kirabo (12 medals).USF Interclub swimming Champs.

Tendo and Kirabo are swimmers who have been in the water since before they could walk. It all started at the age 0f 6 months with double floaters and now they have gone to win dozens of medals in Uganda and all over the world, with the latest being Best girl under 10 years for Kirabo and best boy (age group 13-14) for Tendo in the Excel Independence Gala.
Best Swimmers(Independence Gala, 2015)

They both site winning, achieving something for their hard work as their greatest moment. They work so hard with seasoned trainers and practice intensely throughout the week at Agha khan swimming pool so winning medals and breaking previous records comes with great joy.

Kirabo speaks of receiving the USPA (Uganda Sports press Association) medal for swimmer of the year 2013 at the age of 7 as her best moment in swimming. She was elated to have competed and won over swimmers who were older and more experienced than her.
Tendo’s greatest moment was winning the CANA gold medal, (Confederation of African swimming federations) at the age of 10 which made him the youngest person to have won that medal. He has since won another medal for best performer CANA in Angola early this year.
USPA 2012 & 2013 winners with a Journalist.

Active sports participation they say has helped them maintain excellence in their school work with a constant A+ grade. They go to school at the British school of Kampala where Kirabo is currently in Year 6 and Tendo in year 9. The values instilled in them from professional swimming, such as Discipline, respect, determination, confidence and hard work have influenced their lives and made them exceptional students.

Their professional swimming career begun early in life, as early as 5 years for Kirabo who went ahead to win her first competition soon after. They since have created a system where they document their goals to keep motivated and to keep challenging themselves. “My goal is to break the 1.22 ( one minute and twenty-two seconds) Breaststroke record which is the national Kenyan record by Maria Brunella” says Kirabo.

Hadijah Namanda is on record as the first female referee in sub-Saharan Africa and has represented Uganda in various conferences and fora. She speaks fondly of her journey through sports and she was the sportsperson of the year all through her three years at the university. She strongly encourages everyone to adopt a sports culture as it has proven to boost academic excellence because of the skills imparted by the discipline of sports. She is currently pursuing a master’s degree in Olympic studies to further her sports knowledge and she does all this together with her full-time job at the Electoral Commission.
Kirabo, best 10years and under at the excel Independence Gala 2015.

Kirabo, best 10years and under at the excel Independence Gala 2015.

Kirabo and Tendo encourage all those who feel like swimming is a sport not to let themselves down, to put in the effort, and to keep swimming because it’s a good sport and it’s good for the body.
Hadijah calls upon all stakeholders, parents, and teachers alike to encourage full participation of their children in sports. “sports guarantee Discipline, hard work, target setting, and a clean bill of health. We should Invest in children to start playing… increased trend of obesity in children…Talent modification”