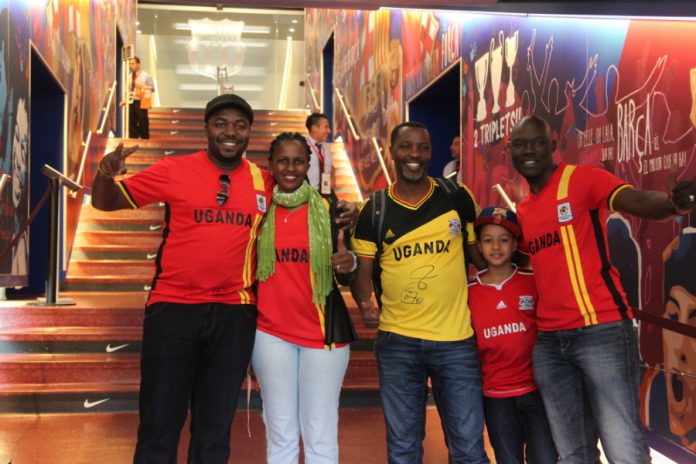 Driven by their love for football and desire to tell the Ugandan story abroad, these men saved money and took a trip to Spain. Joseph Owino founder of Kawowo Sports, Amos Wekesa (CEO Great lakes Safaris), Mark Namanya (Sports Editor at Daily Monitor). To catch up on the detail of the story, This is Uganda spoke to Joseph Owino .

Why Spain?
Well, Spain is a sports power, you know they have just won the European Basket Ball Championship, they have won the world cup and they have excellent teams in Barcelona, Madrid among others so they are a sports powerhouse and in addition to that, they are the 3rd most visited country, so having the opportunity to marry sports and tourism was really a big chance for us to grab that opportunity and use superstars to endorse brand Uganda.

Why did you choose the hashtag #UgandaInSpain?
It makes sense because Uganda was in Spain, I mean, we were in Spain but when Spain comes to Uganda, we shall change the TT to #SpainIsINUganda.
At the base of our minds when we were choosing #UgandaIsInSpain, we had the #SpainIsNotUganda (Hoping you remember it) when the Spain Prime Minister, Mariano Rajoy said that Spain isn’t Uganda and that they don’t need any AID relief at all.

Did you accomplish all you had gone to do in Spain?
Yes and even more, because the idea was just to go and have a presence of Uganda in Spain, and when we went there, we had that presence because we were wearing the Ugandan jerseys and we appeared in the Spanish press, we also met a Mayor of one of the most touristic spots in Spain(the Canary Islands) which wasn’t the plan. We met a mayor who even agreed to send a team to Uganda to talk to KCCA about how they managed to market their city because it is a tourist city and they heavily rely on tourism.
We met big-name players from Athletico Madrid, Barcelona and yet initially we just wanted to meet them and take photos with them while in our Uganda Jerseys but they actually decided that they want to come to Uganda. So Iniesta, is actually coming with his family on holiday not for football but just on holiday. We met Fernando Torres former Liverpool player, and he told us of how he went to SouthAfrica but is also looking forward to bringing his family here.
I think we did a lot more from something that was meant to benefit only us.

When should we expect these legends?
The Barcelona Legends, the former superstars who played for Barcelona and are now retired, are all coming in December. They are coming to play in a match against the Uganda cranes in December so basically they are going to inspire Ugandan players, inspire more people to visit Uganda as tourists and at the same time they are also going to push UNICEF’s programs since it’s one of the sponsors and just so you know the proceeds from the match are going to charity.

Is Ugandan ready to host the Barcelona Legends?
Yes, we have everything in place, everything is available. Besides, when they come, they are not interested in the infrastructure but are here to enjoy the weather. Do you know that Uganda as the best Average of 27C year-round.
The team poses with Fernando Torres after a match

The team poses with Fernando Torres after a match

Tell us more about the December Match.
This match is being organized by the Barcelona Legends Association and we expect many companies to get on board to provide transportation, accommodation among others. The match is already raising heads, the president recently contributed £180,000 Uganda Tourism board has also availed some Euros and we are currently in advance talks with a number of companies that are also going to support the match.
One of the top men organizing this match, Rayco Garcia wants to set up a state of the art football academy in Uganda like De la Marcia one of the greatest football academies that nurtured people like Messi, Fabregas so proceeds from the match will help us set up this academy to develop talent so that in the future when you come to your TV, you are seeing a Ugandan in the La Liga.

On a scale of 1-10, where do you rate Ugandan sports and football?
In terms of skill, I rate it at 10 because people here are skilled, we are only limited by infrastructure, people here play “kataka” and the ball is just like a rabbit. And the fact that we excel with the current infrastructure is impressive. Talent is there, all we need is facilities.

For how long will the legends be in Uganda?
They can’t be here for so long because they are renowned superstars and are wanted around the world, but we are planning on keeping them here for a few days. So we are lucky we even have them here.

When is the match exactly?
*Checks Calendar* The match is on the 4th or 5th of December, so it’s either a Friday or Saturday.

What do you think are the challenges faced by sports in Uganda?
The first problem is lack of facilities, we don’t have enough football fields, and even those that we have don’t have grass on them and when people try to get grass there, an investor comes to take away the land. The biggest issue is the lack of facilities.
Then there is poor management, in the sports sector and also we don’t have sufficient funding and this goes across the board, from football, golf, tennis to Lacrosse.

Any last words to the readers?
We shouldn’t wait for the government or anyone else to promote our sports or tourism, much as we want the government to be involved, we need to roll our sleeves and get involved.