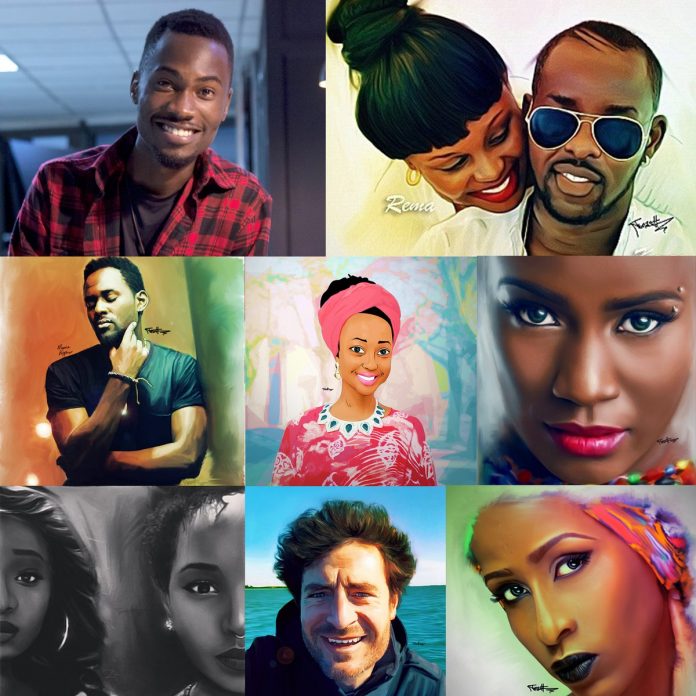 if you’ve spent any time on Twitter over the last few days, you might have noticed a lot of really cool art from around the world taking over your feed.

Black artists, graphic designers, and illustrators from all over the world are introducing themselves and showcasing their art to the timeline and to the world, using the hashtag.

You can thank Annabelle Hayford (@sparklyfawn), a 19-year-old, a gender artist studying animation and illustration at the Maryland Institute College of Art (MICA) for rallying others in their field to share their work.

Some EXTREMELY TALENTED Ugandans across the globe did not sit down. From New York, to London, Kampala and across the globe, Ugandans took to Twitter to also engage in the challenge and boy oh boy, they are proving that Uganda has got talent.

Let’s not talk too much. Here they are. Enjoy!

#drawingwhileblack Hey…I am an artist from Uganda. I use black ink to create my murals. pic.twitter.com/1tdp3U1Fdl

4. It seems we won’t get enough of Solomon W. Jagwe

I am a concept artist, 3d modeler and animator born in #uganda currently working as an Art Director for a VR game studio #drawingwhileblack pic.twitter.com/lpWb5jQx5K

6. Here comes Andrew Mamawi. He’s not at all affiliated to Game of Thrones

7. Introducing Elise aka Seiishin who does character design and story-boarding in animation

ey! i’m Elise aka Seiishin, a pansexual artist from Uganda hoping to do character design or storyboarding in animation! #drawingwhileblack pic.twitter.com/d9Padqtagx

8. Dorothy had to introduce Xenson because a multi-media artist needs some respect!

9. The only ballpaint artist on the hashtag- so far. Say hi to Michael Dungu

10. Everyone stand up for Jonas Rayme. This guy is a gem!

I am Jonas Rayme, a Digital painter,…. from Kampala, Uganda! 😉#drawingwhileblack pic.twitter.com/T8256ddpMO

This is my friend Darsan Aine from Uganda 🇺🇬. I believe he is one of the most talented artists in Uganda. RT to give him some market! pic.twitter.com/LDEKOaurO0

12. EZI (not Mr. Eazi) the vector artist also came through!

13. Daniel the low key chef made a plot twist!

Hello, I’m Daniel from Uganda 🇺🇬. I’m an artist and low key chef. These are some of my works. Hope you like them. #drawingwhileblack pic.twitter.com/3OCOMd3f8M

If you’re an artist and want to talk to us about your art, we’re eager to say hello! Send us an email on info@thisisuganda.org and let’s talk!