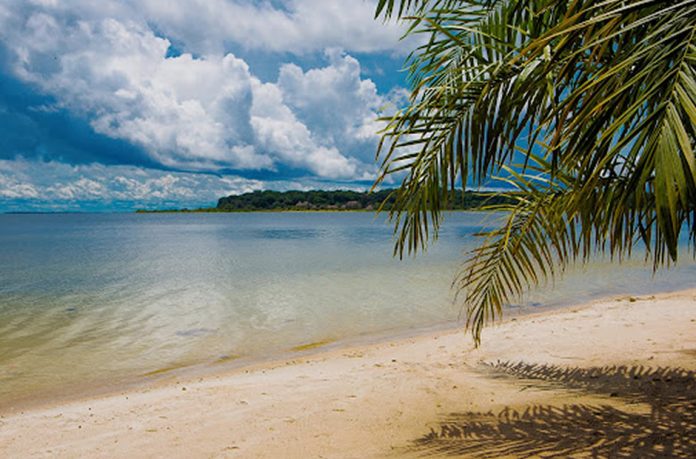 Perhaps I should mention that I’m attracted to terrifying, mysterious, precarious things. THINGS, not people. I’ve also narrowed it down recently to places. And islands are some of them. Once, when I’d just left a very serene island, (Bussi Island), my boat guy was arrested for attempted murder and robbery. The other time, when I was at an island somewhere in Mayuge district, Uganda, I was told that sometimes, they hide dead bodies among passengers on the boats. But once you love travel, it doesn’t matter what comes with it. And somehow, islands keep luring me.

So this one time I’m in Kampala, bored to death. A friend is visiting from Muenster, Germany, and she wants to go somewhere quiet. We decide to go for a boat ride. We head down to Gaba and look at the boats. If you’ve been to that landing site, then you know that it proliferates the hygiene issues of Kampala. So to escape from it all, we grab the next boat heading to where? None of us knows. Later I learn that our destination is Bule Island, and it’s only twenty minutes away from Gaba. It costs only 2k on the boat. Cargo, set. Passengers, set. These identification jackets they like to call life jackets, set. My friend Johanna has her camera, I have my phone and we both have a few notes in our pockets. It’s supposed to be a random getaway, stress-free and baggage-free.

The beauty of travelling on a small boat is that you feel the waves as they sway the little boat around, and you can touch the water as the boat sprints forward. As the engine growls, Gabba and Kampala slowly recede to our backs. It’s always refreshing to go away. To leave a piece of you behind but take most of you on a journey, even if it’s to an unfamiliar island, where you know no one and nothing.

Twenty minutes later, we arrive at Bule. It feels like very far away. The breeze is much cooler, the air much fresher. Even the trees are greener.

We get ourselves a boda guy (motorbike taxi) and we tell him we just want to take a ride across the village, probably stop somewhere cool for a bit, at a hotel or campsite that he knows, and come back later in the evening. He smiles. This is very easy, he says. How much does he want? We ask. He thinks it through. Twenty thousand shillings, he finally says. It’s a deal.

When the bike races up the hilly island, it feels strangely familiar. Like that forest back home where I’ve taken a walk before. Like that place on the many islands I’ve been to where clean air enters your lungs and makes all things new. I feel new. I feel at home. Our guide knows we want to see the village so he rides quite slowly and we take the freshness in every step of the way.

The guy (whose name I honestly don’t remember) takes us to a few campsites we don’t like.  Then he takes us to a magnificent hotel (given that it’s hidden away on a remote island) and we love what we see. Lake Heights Hotel, the sign reads. We ask if our guide wants to go and come back for us later but he brushes us off. He’d rather wait for us. He’d also like to rest. Who are we to say no? So we all go up to the reception and tour the place. We discover how expensive it is, given that their cheapest room is UGX 300.000 (about $85). We decide to sit in their gardens and enjoy the view because it’s absolutely irresistible. The lake, on the other side, has calmed down. We sit and bask in the final splendour of the day. There’s simply no better feeling.

A few hours later, we pay for our Coca-Cola and Pepsi and wake our guide who’s napping away in a hammock. We head back to the landing site. The sun is setting, and though it’s gorgeous, it’s getting cold, and we didn’t carry any jackets.  When we reach the landing site, we thank our guide and pay. The guy says something inaudible in Luganda. We walk on towards the boats. Then he screams at us and asks why we haven’t paid him fully. Now if you’ve used a Uganda boda before, you know what follows after a guy has accused you of not paying him fully. The other boda guys surround us. In a few seconds, it turns from a very adventurous and fun day into a feasibly dangerous night. All I’m thinking is; I need to get this German child outta here.

The first boat we approach turns us away. And so does the next, and the next. Nobody is going to transport thieves who just robbed their fellow countryman. We’ll swim to Kampala if we insist on going. By this time I’m getting very furious, and my fury is quite destructive so I decide to turn and confront our guide turned enemy. What is wrong? I ask. Didn’t we agree we’d give him Ugsh20,000? Isn’t he the one who gave us the figure? Why is he lying? Why is he saying we owe him more?

One of his colleagues jumps in and cuts me short. How can we pay only Ugsh20,000 to someone who offered us a tour of the whole island? My answer is simple. He knew the island, we didn’t. Still, he gave us a fare, we paid it. We didn’t even bargain! At this point, the guy (our guide) mentions how we delayed him at a hotel and denied him a chance to do other jobs. I look at him in the eye. He seems dead serious. Except he’s lying. We offered to pay him and let him go so he can come for us later. He refused. Doesn’t he remember that? He walks away. Things are getting tougher. The small crowd is closing in. My friend does not understand a single word. What must she be thinking? What will she think of Ugandans if she understands it? I wonder.

Quickly, I translate the fiasco to Johanna and she’s shocked. She can’t believe the guy turned on us just like that. She too wants to look him in the eye and ask him what he means. She follows him. I follow. She asks, he says he needs Ugsh45,000. I’m stunned. I was beginning to think that perhaps we can give him an extra Ugsh5,000 or something but now he shocks me with this new amount. Is he serious? Dead serious. The chairperson of some sort of association for that stage comes to us. Are we going to pay the extra money or not? I look at him, give him a summary version of the story in which his interest is as that of a pig in combs. All he wants to know is if we want to pay the 45k. Hell no! There’s no way in hell I’m paying over 100% more than I’d agreed to in the first place. Okay, he says. Nobody takes these two, he says to the boat men. The boda guys disperse, back to their business. The 2nd last boat leaves. The last boat begins to load. It’s getting real dark. I feel cheated, I feel ganged up on.

When the last boat is about to leave, Johanna is the first to cave. Maybe we should just pay the money, she says. I look at her. I only have about 10k left on me. Fortunately she has the rest. I take the money to the guy and they let us on to the boat. I still can’t comprehend it all.

As the boat makes its way back, I’ve never felt any happier to return to Kampala, to people I know, to places I’m used to. But also, I’ve never felt so angry at a people, a place, and a journey. I have hated Bule Island, and the boda guys, and over time I keep thinking; why would anybody ever go back to Bule? But perhaps my passion for travel and for islands will overcome my fears for unfriendly people and public transport robbery. And maybe, just maybe, one day I’ll pack a bag, and head back to Bule Island. Or maybe not.