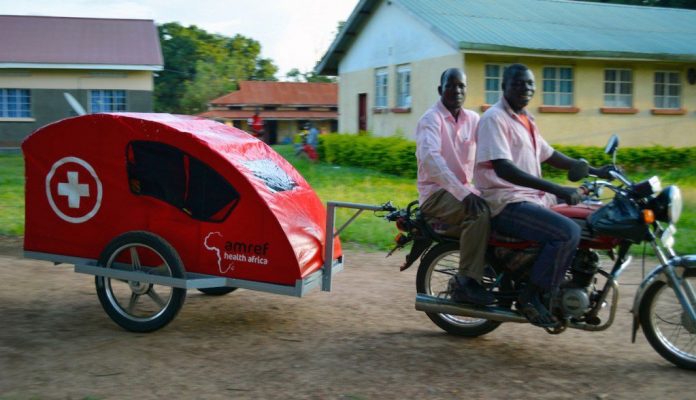 Here is how a well executed fast and simple plan is managing to reverse the trends of maternal health care system in Uganda. From going to remote areas and helping pregnant women, the Bike Ambulances are improving lives of pregnant women in many villages in Uganda with high maternal mortality rates, leading to a healthier future.

Before 2015, health and community workers in hard to reach areas in Uganda lived in a dilemma. They had to trek to impenetrable villages trying to save expectant mothers lives. Most roads were not friendly to cars and they had one solution- carrying the pregnant women on their backs or on homemade stretchers. To cut the long story short, many did not make it to hospital. They died on the way.

Fast forward to 2015 and now, a light is beaming bright at the end of the maternal health care system tunnel in Uganda. Bike ambulances are the reason. The reason why many pregnant women in rural Uganda are now singing to the glory of a simple, fast and cost effective way they are reached in, in remote areas.

Bike ambulances are unstoppable. On the dusty and muddy roads in remote areas whether Uganda or in any other low developing country, two wheels are better (and reliable) than four. Where a vehicle ambulance may take two hours to reach, a bike ambulance can take thirty minutes.

In some areas, you find that an expectant mother has to travel over 30 kilometers to reach a health center where they have to deliver and out of say 70% of expectant mothers who go for antenatal care I, only 20% go back to deliver meaning there are so many who remain back home and  delivery is done by Traditional Birth Attendants (TBA) which number you can’t tell and that’s why bike ambulances are reversing this trend vigorously.

The bike ambulances idea is a simple one. They are two-wheeled ambulance trailers that can be easily connected to virtually any bicycle or motorcycle. When a patient needs to be moved, the Village Ambulances offer a safe alternative to the precarious boda-boda (motorcycle) ride that would traditionally be used to transport many Ugandans, or worse, being left at home to suffer rather than seeking the help the patient needs.

The motorbikes have gone to over 10,000 callouts in four years. Photo credit: ITV

They are here to reverse trends indeed. According to the 2011 Uganda Demographic Health Survey, Uganda’s maternal mortality rate was found to be 438 per 100,000 live births.

On the other hand, the MDG 2014 report by the United Nations Economic Commission for Africa together with the African Union, African Development Bank Group and the United Nations Development Programme on assessing progress in Africa toward the MDGs, to date 95% of Ugandan women receive antenatal care from a skilled provider at least once, 57% deliver babies in a health facility under the supervision of a skilled provider. Furthermore, 33% of the mothers received a postnatal checkup within two days of birth.

The new emerging statistics by the United Nations Economic Commission only shows one thing, that there are positive strides in achieving zero maternal deaths which directly and indirectly, can be attributed to bike ambulances.

This innovative idea however, was invented by Chris Ategeka, a graduate of Engineering from the University of California who returned back to Uganda in 2013 to help contribute to the reduction of Maternal death in Uganda and founded Rides For Lives.

Ategeka founded Rides For Lives, a nonprofit that invests in training local healthcare professionals so as to create a sustainable workforce and manufacture locally sourced medical vehicles with the mission of improving medical access and economic opportunities to those that are the most vulnerable.

In an interview with NPR, Ategeka and Ride For Lives stated that they have managed to support the fabrication of the bike ambulances  at centralized workshops in local villages which has led to the distribution of more than 1,000 bikes and bike ambulances throughout Uganda.

Only 100 bike ambulances can transport about 10,000 expectant mothers a month. Put another way, this is 100 lives saved every year after deploying just one of their ambulances to a district each year. With over 200 Village Ambulances distributed in over 23 districts across Uganda, it doesn’t take a mathematician to work out that this equates to over 5,000 lives saved every year thanks to their innovation.

Bike ambulances are loved because they are fast, affordable and can reach remote areas. Photo credit: Kissito Health

However, the question remains, how are young mothers getting access to these bike ambulances and how can we have more of these?

Many young mothers continue not having access to antenatal care services in different parts of the country. Still, a big number of them do not have information about the existence of bike ambulances to help significantly reverse this trend.

This is where district leaders and civil society must come in to advocate for increased funding and awareness of the innovative idea. This idea, can be transformed then into greater heights and before we know it, it will be a major turning point in the history of maternal mortality rates in Uganda.

Simon Otiga, The Vice Chairperson of Soroti District while at the launch of the ambulances in the district on January 27, 2015, urged the beneficiaries to use them so as to boast the maternal health care system of the district and reduce on the maternal deaths.

The Speaker of the ninth Parliament Rt. Hon. Rebecca Kadaga while launching the ambulances last year at parliament, encouraged MPs to advocate for more bike ambulances to be distributed to all villages in Uganda so as to reduce on the maternal mortality rates.

Initiatives like these and others being implemented players in the health sector like the Voices For Health partners for example FOWODE, Reproductive Health Uganda, Reach A Hand, Uganda and UHMG to mention but a few, could help in saving lives of many young mothers all over the country who continue to die because of failing to get access to fast, cost effective and reliable services. That is when we will achieve a big step towards reducing maternal deaths in Uganda.