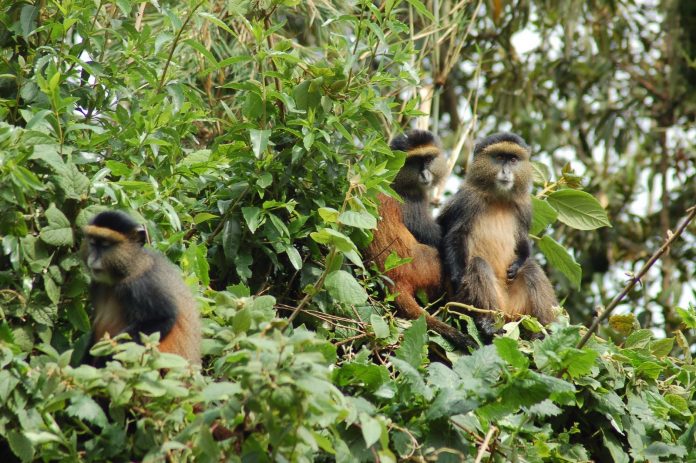 When you visit Uganda for a gorilla safari, one of the things you should add to your list is golden monkey tracking, an adventure that can only be taken in Mgahinga Gorilla National Park in South Western Uganda. Golden Monkeys might not be very popular primates like the mountain gorillas, yet they are indubitably very elusive and convivial creatures worth the attention of visitors. These riveting creatures are unique and endemic to the Virunga Mountains of Central Africa. The Virunga Region spans Rwanda, Uganda, and the Democratic Republic of Congo and it is one of the richest biodiversity areas in the world.

Much as Golden Monkey tracking is not as popular as mountain gorilla trekking, it is all the same exciting adventure that you can experience on the African continent. These photogenic creatures are always arboreal! They have been habituated for tourist visits and therefore not timid to see human beings in their territory. Meeting these playful primates will always captivate the tourists who hike to the high peaks of the park to see these fascinating animals in their natural habitat.

What are Golden monkeys?

Golden monkeys fall in the class of ancient monkeys! These primates are known for the noticeable golden furs that cover their bodies, thus they are referred to as “Golden Monkeys”. They are a sub-species of the Blue Monkeys and inhabit the lower slopes of the Virunga Mountains that are dominated by the bamboo forest.

Golden monkeys do not swerve off too high up the mountains like the mountain gorillas, but instead, spend much of their time in the bamboo closer to the base of the mountains. They move in hundreds, occupying the bamboo canopy picking the shoot from the tops, and interestingly also going down to the ground.

They consume 20-30 species of plants but mainly bamboo shoots, though sometimes they partake of fruits, leaves, and some invertebrates.

There is one habituated golden monkey group in Mgahinga National Park, which is available for research purposes and visits by tourists. To see these golden creatures, you must possess a permit that is issued by the Uganda Wildlife Authority. These permits cost USD 50 per person but you have also to pay for a park entrance permit of USD 40 per person. Therefore the total cost is USD 90 for a single trek into the national park.

Golden Monkey Tracking Permits can be booked at the Uganda Wildlife Authority offices in Kampala or at the park headquarters in Kisoro Town.

Elsewhere, you can only see the golden monkeys in the neighboring Volcanoes National Park.