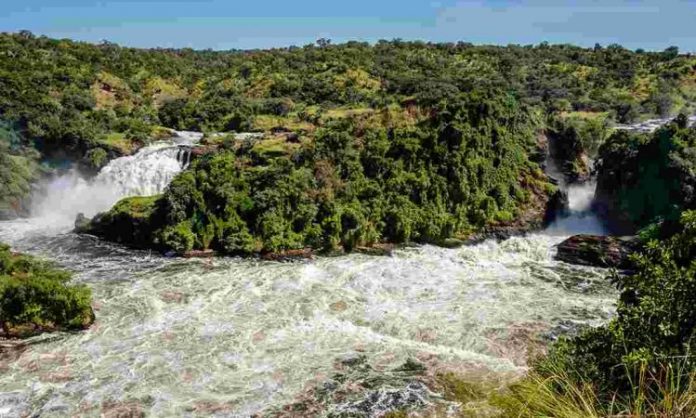 The essence of the might in the world’s longest river (The Nile River) is captivatingly dramatized within Uganda’s Largest Area of a National Park; the Murchison Falls National Park. The Park is located in the northeastern part of Uganda crowning the upper shores of Lake Albert, topographically bisected by the Nile River and christening the northern ends of the Albertine Rift Valley.

The waterfalls from which the park got its moniker are perhaps the most magnificent of all geographical formations in Murchison Falls National Park. They were named after one of the most active members of the Royal Geographical Society called Sir Roderick Murchison who also served as its president at the time when the falls were named.

The waters of the Murchison Falls are birthed by the source of the Nile in the world’s third largest fresh water lake (by area) called Lake Victoria in the southern part of Uganda, and shared among the three giants of East Africa; Uganda, Rwanda and Tanzania.  The Nile flows north until it reaches the Murchison area where it struggles through the weird geology in a relentless campaign to share its waters with the northern Nation States of South Sudan, Sudan, Ethiopia and Egypt; eventually feeding the Mediterranean Sea with mirror-clear water.

The Nile’s itinerary in Murchison Falls National Park involves beating upon large static rocks, squeezing through a tight 8 meter gorge and then violently plunging for a record 43 meters (141 feet) with foamy water into what is called the Devil’s Cauldron; where the waters form a mirage in rainbow colors. The waters then drift on for several kilometers rallying upon rocks; forming entertaining rapids after which the river innocently streams-on broadly with relaxing calmness.

At a traveler’s cost of 15 US$ for Foreign Non-Residents (FNR); 10 US$ for foreign residents (FR); and 10,000 Uganda Shillings for citizens of the East African Community (EAC), tourists can enjoy a hike to the top most part of the falls in which they get to see it all; a complete waterfall safari that lasts for a minimum of two (2) hours.

Tourists may either approach the falls from the front after an early morning boat cruise upstream, that ends at the bottom of the falls from which tourists disembark the sea-going vessel to begin the hike up to the top of the falls. Alternatively tourists can make a mid-morning or afternoon detour from the Masindi – Paraa road along a more slippery and challenging 15 kilometer road to eventually arrive at a footpath that continues from the top to the bottom of the falls. Along the way, they will be fortunate enough to see several wildlife species like the buffalo, several antelope species and a couple of bird species.

At the top of the falls Uganda Safari guests will individually experience the power of the falls. Tourists will feel the solid rocks below their feet shaking like a continuous earth quake and light showers from the splashing and whirling waters will bless their faces. This deafening sound may not allow you to hear many of the other jungle sounds but you will be assured of continued vistas of the unspoiled wild environment while countless muted birds fly past.

A trek to the top of the falls is a worthwhile adventure while in Murchison Falls National Park because “At the Top of the Falls, You See it All”.