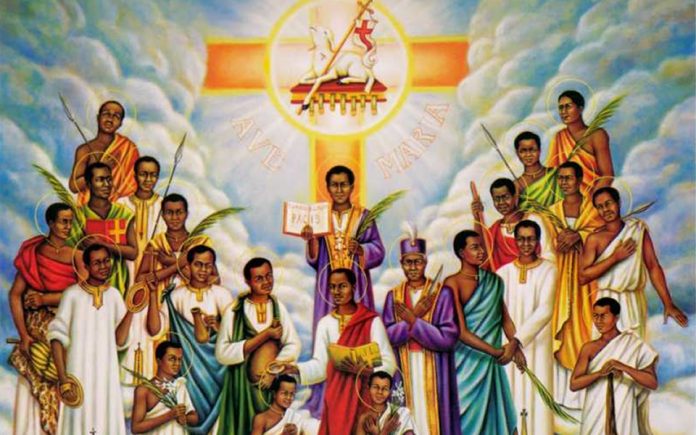 Uganda Martyrs day celebration is held every third June at Uganda martyrs’ shrine in Namugongo, Kampala-Uganda. It is declared a public day in the country.  The shrines are located 15 kilometers East of Kampala City off Jinja, Namugongo. Prior, it was a place of execution of all people who dedicated severe offences within the Kingdom of Buganda. It is at this place where Christians where burnt on 3rd June, 1886 Namugongo and ever since then, it has steadily taken on the image of attraction as a place of pilgrimage, as God simultaneously has honored them before Believers.

It gives chance to millions of people the world over, near and from far, to partake a pilgrimage to this holly land- Namugongo Martyrs Shrine. The shrine is to a greater extent catholic based dedicated to the Martyrs of Uganda who shed their blood because of the Christian faith. The Shrine is well known for its lovely and unique inner and outside. The construction of this shrine began in 1967 though it was completed and officially opened by Papal envoy, His Eminence Sergio Cardinal Pignedoli on 3rd June 1975.

During this time, the Uganda Martyrs’ day celebrations begin with a tour to various parts of the country especially in places where different Martyrs were either born or killed. These celebrations are mostly attended by travelers from adjacent countries including; Tanzania, Kenya, Rwanda, Burundi, Democratic Republic of Congo and from some other continents.

Many of these pilgrims, young and old, walk miles and miles from their home areas up to Namugongo as a sign of honor to the Martyrs who shed their blood for the sake of our Lord Jesus Christ. Pilgrims also spend weeks on this long journey trying to invoke the Uganda Martyrs to intercede for them in overcoming their problems. These, indeed have often testified Martyrs’ positive reaction to their prayers as they get salvaged from their bonds.

In preparation for Uganda Martyrs Day, do not only pilgrims or faithful flock to the place, business people as well come to Namugongo in big numbers to sell foodstuffs and other merchandise to fellow business people and to pilgrims. This makes the numbers shoot high not only at Namugongo but even in the neighboring trading centres.

There is an interesting lake at the site. This brings back the memories of the work executed by St. Charles Lwanga when he was still a side. In fact many pilgrimages pilgrims have often drawn water from this lake and later given testimonies about this water healing them of various diseases.  There is a nice Pavilion in the lake .This grass thatched pavilion, also in circular form like the Shrine is supported by 4 pillars and can accommodate more than 300 priests and a number of bishops that turn for the High Mass on Martyrs Day.

Uganda Tourism Board exhibited at the Catholic shrine at the delegates. Registration point, exhibiting and distributing the Martyrs Trail brochures, Uganda Tourism Board DVDs and brochures. Over 2500 international delegates from Rwanda, Burundi, Congo, United States of America, United Kingdom, Kenya and Tanzania attended the function.